City people usually have an escape plan for the weekend. In and around Milan there’s almost too many options. For starters, if you pick the closest lake from the city you’ll end up in Desanzano Del Garda—- or some people just call it Desanzano because they know it’s a beachy town on the shores of Lake Garda. You can get there by train from Milan Central Station. The ride on a high speed train (Frecciarosa) is about 50 minutes. A 10 Euro taxi ride will take you to the center of town in 5 minutes where the Ferry Boats, water-side hotels and cafes are. 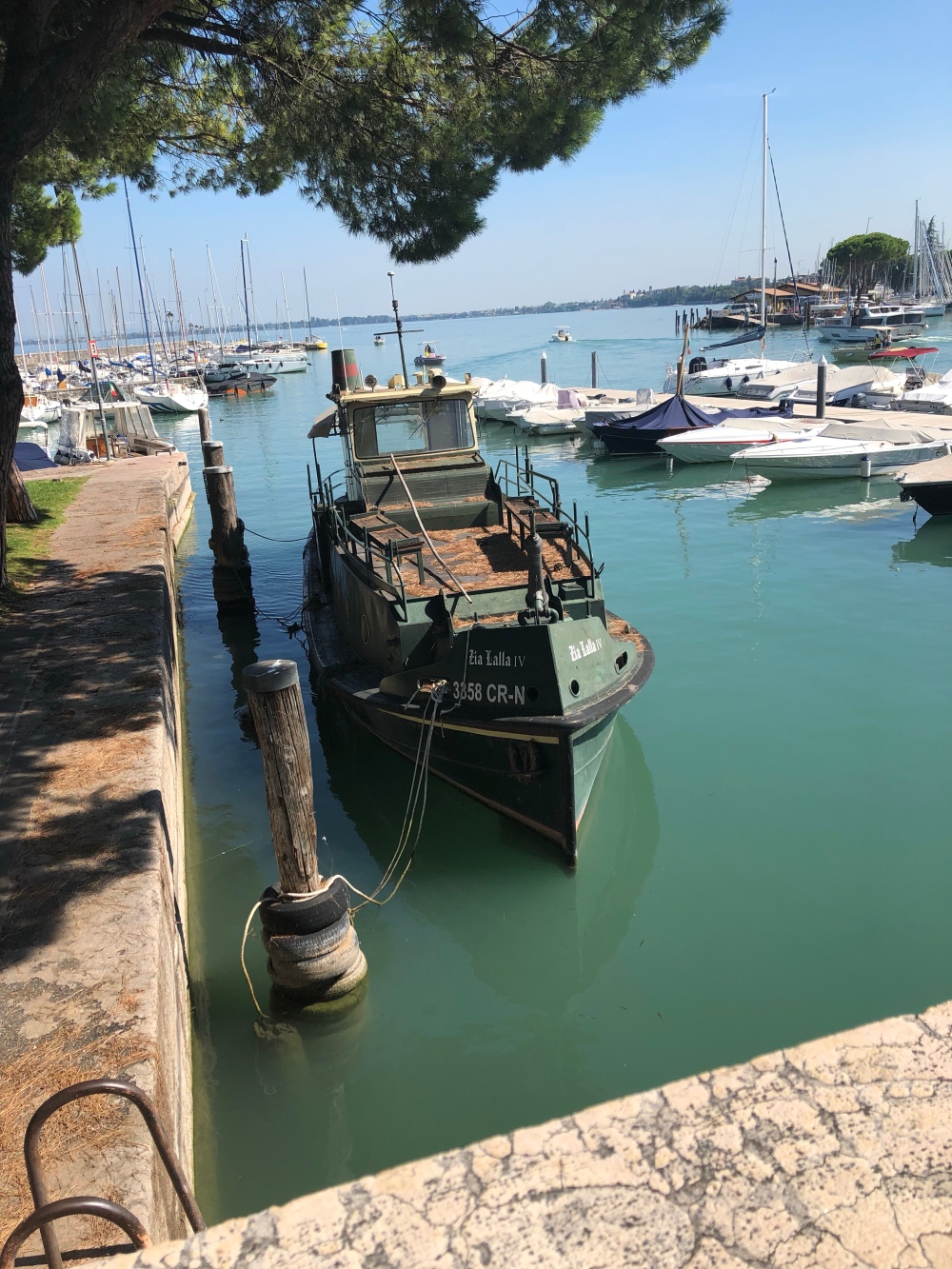 First you”ll be awed by the hypnotic turquoise of beautiful Lake Garda. Then–when you see what the people are wearing you”ll be appalled. If the fashion police were here—there”d be a lot of arrests. If you ever find yourself wondering…Hmmm what should I wear to Lake Garda? dig up anything you wore to a wedding or a funeral in the 20th century , then go to the clearance rack at your local Walmart for shoes and accessories. 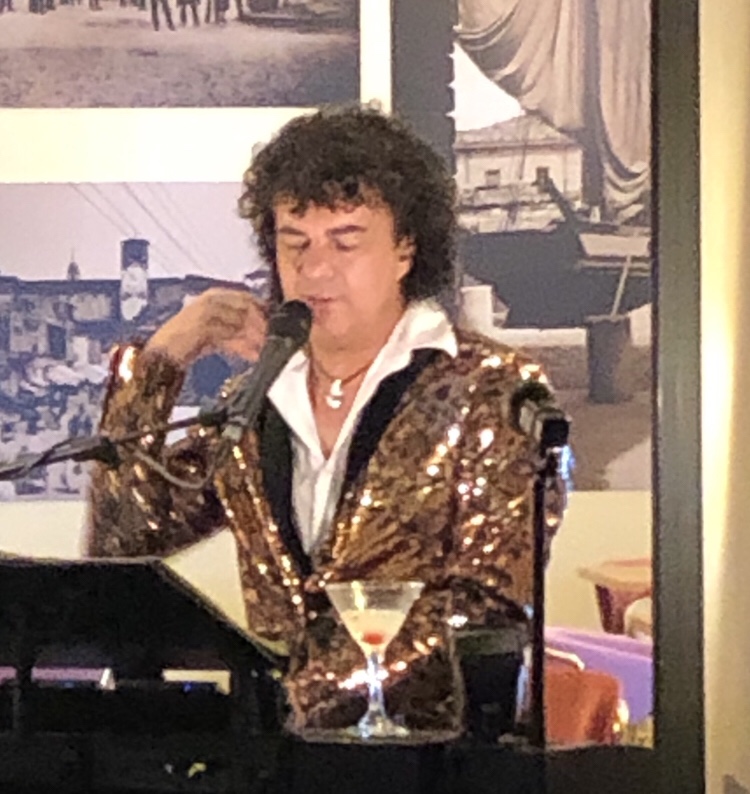 Evenings in the town piazza are so lively and relaxing you might even start singing along with the cheesy entertainment. I was smitten with a musician who looked like he”d been impersonating the lead singer from Air Supply since the 80″s and was still wearing the same jacket and hair. It”s more likely he”s been wearing that sequined lounge jacket for 30 years but recently replaced his hair. It could be a snazzy wig he picked up on a trip to Vegas for an Elvis Impersonator convention. Whatever his story, he knows how to get people singing and making fools of themselves.

After a couple of Campai Spritzes, who cares if you”re singing Volate in Italian that”s “no molto bene” . It didn’t take long before I knew that my singing sucks as much as my Italian. As I sang along with the 80s guy I thought I felt multiple stab wounds in my eyeballs. I don’t know if it was the blinding flash of copper sequins on his jacket or a woman who was giving me the “death glare” . In Italy when you stare at someone that you would like to kill or put a curse on, this is called the “mal occio” or “evil eye.” Either this woman hated my singing or hated my outfit. I wasn’t wearing any 80″s throwback fashions… no rhinestone bedazzled leopard print or faux leather . My clothes are West Coast cool. Therefore I must die by the glare of the evil eye. 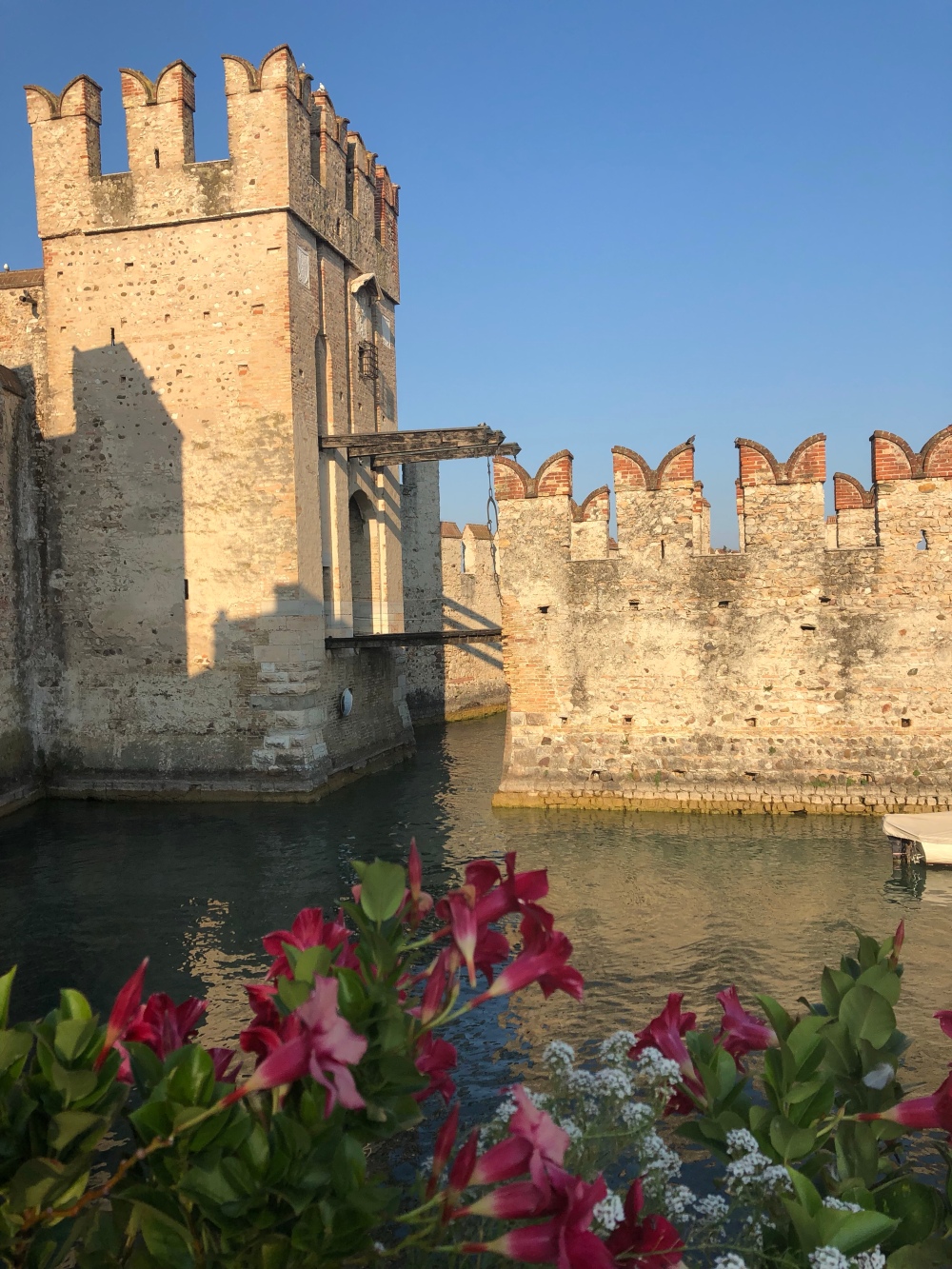 The great thing about Lake Garda (aside from the surreal fashion) is the relaxing ferry boat rides you can take from Desenzano to explore many other small towns around the lake.

A ride to Sirmione is about 6 Euros round trip. You can wander around this charming little town with its ancient castle and colorful gardens. Enjoy a drink and some lunch at a cafe near the castle where you can people-watch and see who”s dressed in hard core horrendous outfits. . It’s clear that no one who visits Sirmione has any gay friends who can at least help them look a little less like disco refugees. Oh yeah, there’s plenty of night clubby bling in the blazing sunlight of day. Just make sure you wear sunglasses — and sunscreen . Those Rhinestone studded sandals can burn your flesh if you get close to them. .

The excess and gaudiness of Sirmione also pervades into the food. Where there were tiny dollops of gelato in Milan…. here there are mounds and piles so big and fluffy you wonder if they’re made of something hatched in the laboratory of a mad scientist. 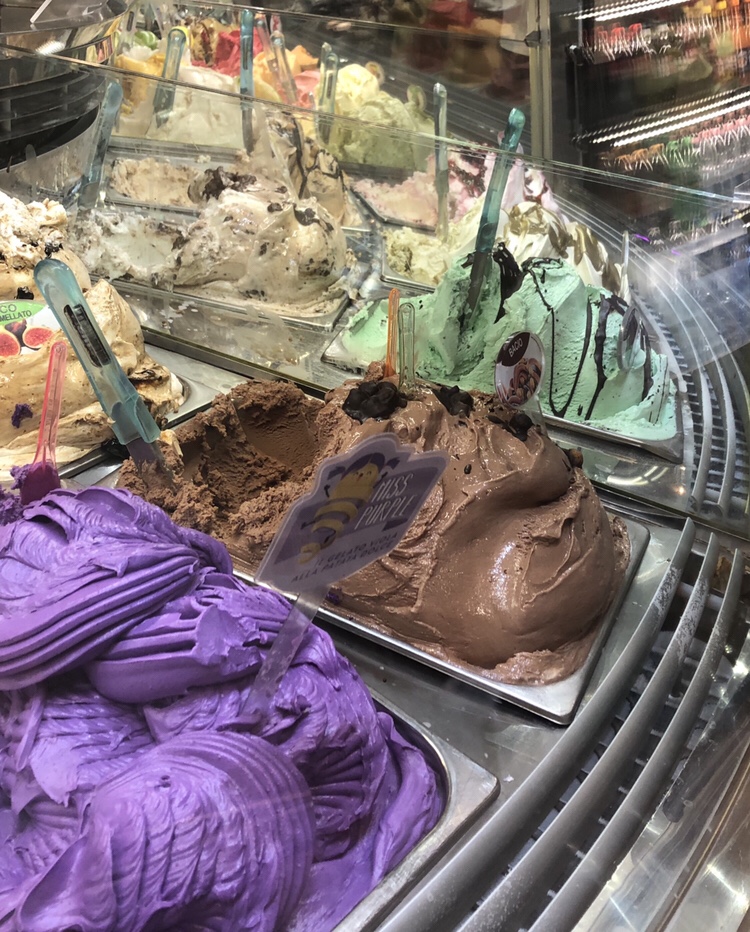 If your meal turns out to be larger than life , don’t try to eat it. I ordered grilled octopus and got a piece of the creature from the black lagoon. Usually grilled octopus area tender skinny pieces of tentacles . with tiny suction cups. I took a bite but stopped when I thought I heard it scream The at me in Italian. 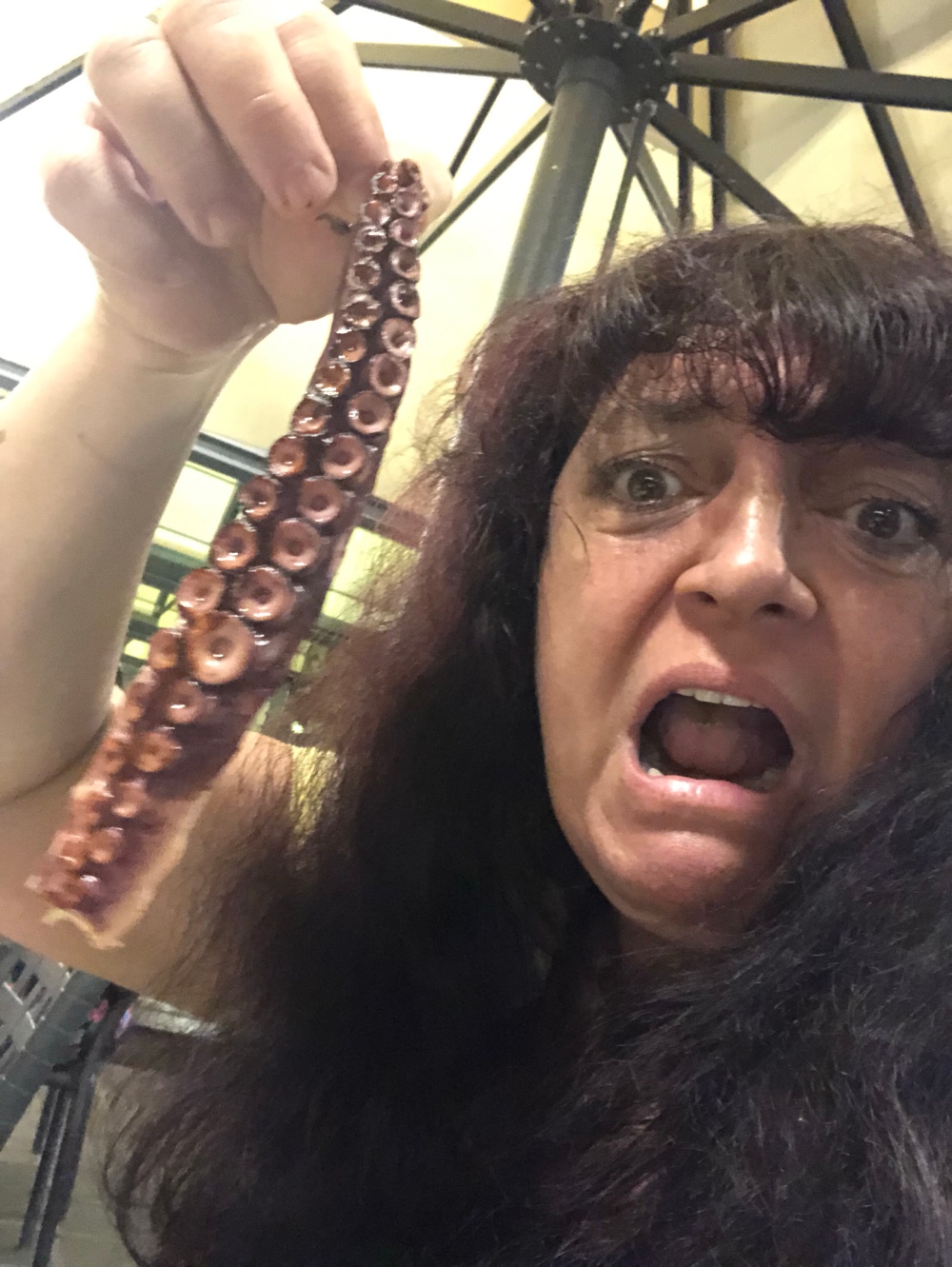 Don’t be afraid. Order it on a pizza. The natural beauty of Lake Garda will make all the gaudy details seem like well deserved amusements. Go ahead , indulge in a pair of bedazzled socks, a colossal gelato cone and a T-shirt that says I love Leonardo.

Where I stayed : Hotel Europa . One of many Lake front hotels that skirt the shores. Europa has astonishingly comfortable beds ( thick memory foam) that groove to the shape of your body no matter what shape you’re in. It’s like sleeping in a cloud. I’m big on comfortable beds . There’s nothing like ending a magical day in Europe sleeping on a rock hard torcher rack. You’ll find plenty of this in Venice, but more about that later! My next post will be about another magnificent Lake — Como! Stay tuned ! 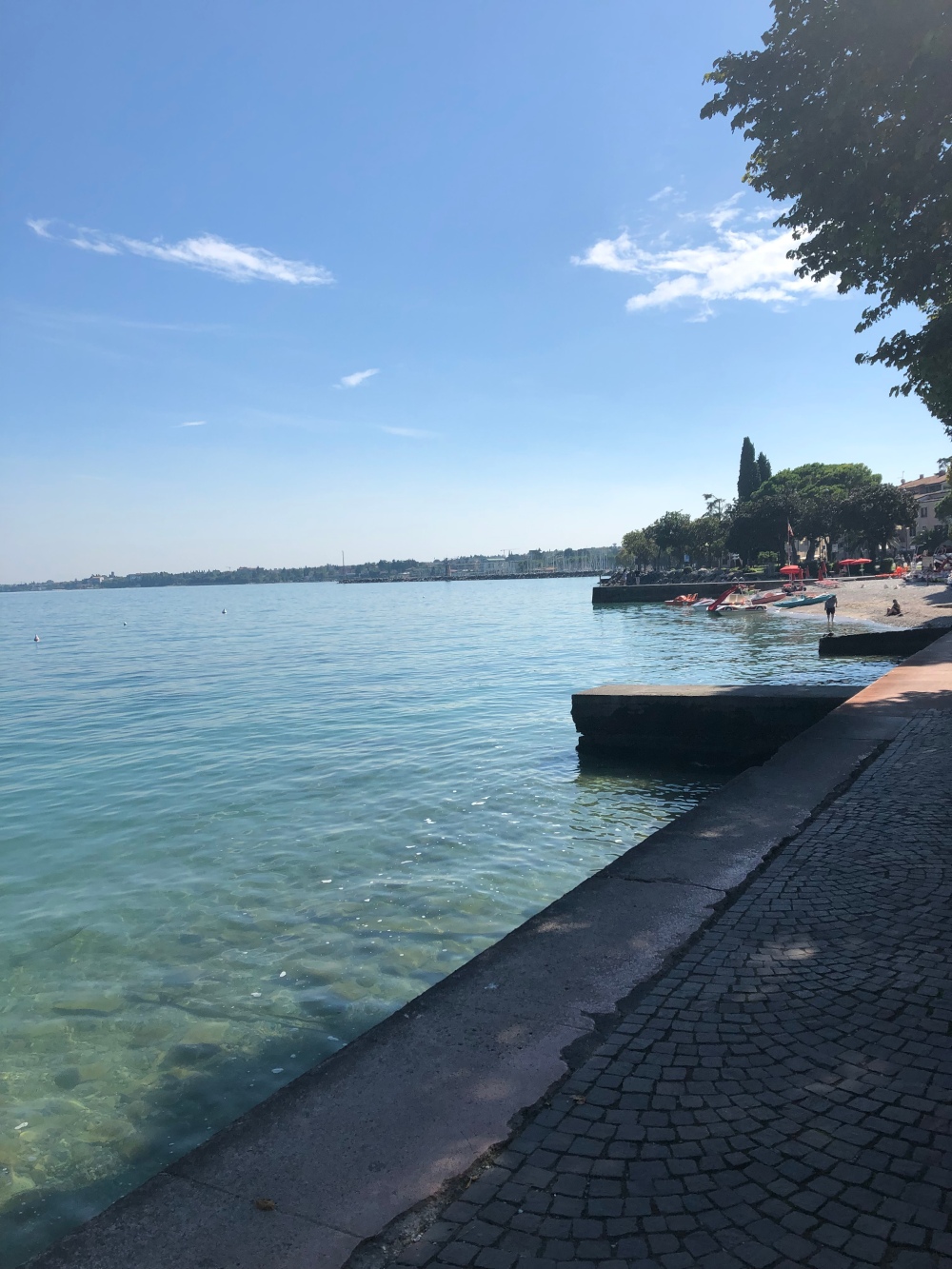 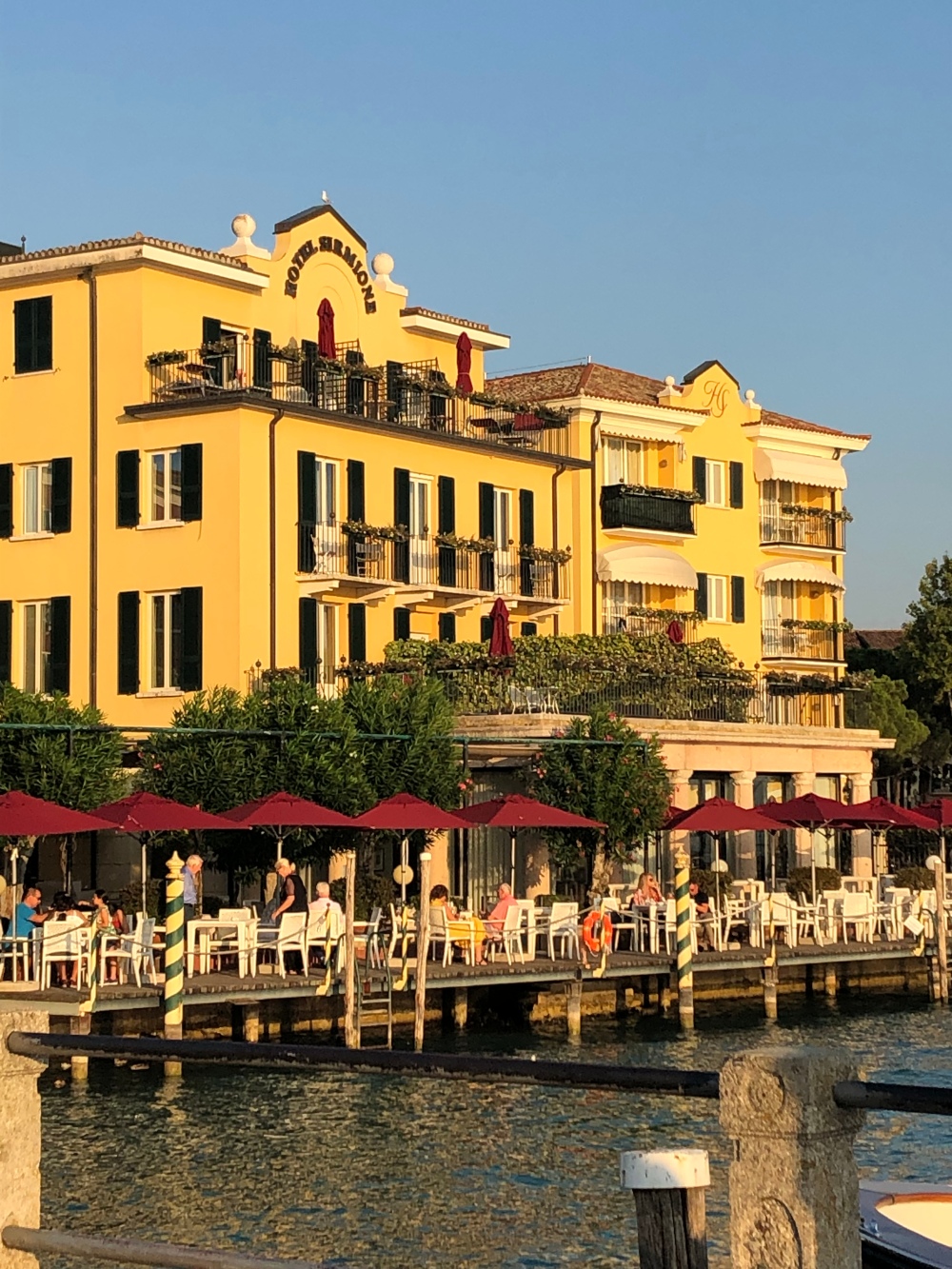